Patient H.M.: A Story Of Memory Madness And Family Secrets

Patient H.M.: A Story of Memory, Madness, and Family Secrets 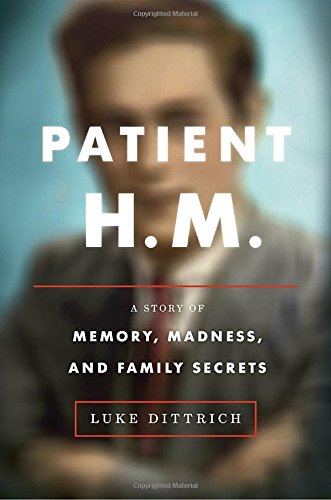 Editorial Reviews Review “An exciting, artful blend of family and medical history.”–_The New YorkTimes_ “Beautifully told . . . a book that will rank with Rebecca Skloot’s _TheImmortal Life of Henrietta Lacks_ in the realm of outstanding medical ethicsnarratives.”–_Associated Press_ “Dittrich’s account raises entirely new questions about the way in which theresearch on H.M. was conducted–and about the conclusions that have long beenincorporated into our understanding of memory.”–_New York Magazine_ _ _ “Remarkable.”–_Wired_ “Oliver Sacks meets Stephen King in a piercing study of one of psychiatricmedicine’s darker hours. . . . A mesmerizing, maddening story and a model ofjournalistic investigation.”–_Kirkus Reviews _(starred review) “At the heart of this breathtaking work . . . is [Luke] Dittrich’s story ofhis complicated grandfather, his mentally ill grandmother, and a long-heldfamily secret, with Molaison stranded ‘where the past and the future werenothing but indistinct blurs.'”–_Publisher’s Weekly_, starred review “The machinations of scientists and researchers–their personality andambition, power and hubris–are of equally vital (and cautionary) importancein Dittrich’s unusual and compelling mix of science and familyhistory.”–_Booklist_, starred review “_Patient H.M_. tells one of the most fascinating and disturbing stories in the annals of medicine, weaving in ethics, philosophy, a personal saga, the history of neurosurgery, the mysteries of human memory, and an exploration of human ego. A monumental contribution to our understanding of medical research, and of ourselves, _Patient H.M._ is sweeping, meticulous, and seamless–with an ending that, like the best of scientific investigations, challenges everything that came before it.”–Sheri Fink, M.D., Pulitzer Prize winner and author of _Five Days at Memorial_ “In _Patient H.M., _Luke Dittrich explores the limits of science and the mind.In the process, he rescues an iconic life from oblivion. Dittrich is wellaware that while we are the sum of what we may remember, we’re also at themercy of what we can forget. This is classic reporting and myth-making at thesame time.”–Colum McCann, author of _Let the Great World Spin_ “Luke Dittrich has achieved something remarkable in _Patient H.M._ This booksucceeds on every level: as a fresh look at the most famous patient in medicalhistory, as an expose of our dark history of psychiatry and neurosurgery, and,most powerfully, as a deeply personal investigation into the author’s past.And yet it’s still a page-turner that reads like a thriller. It deserves aspot next to the great medical histories _The Immortal Life of HenriettaLacks, The Ghost Map, _and_ The Emperor of All Maladies_.”–SusannahCahalan, author of _Brain on Fire_ “It felt as if I read this book in one breath. _Patient H.M._ is afascinating, powerful investigation, a matryoshka doll of nested stories aboutthe past and present, remembering and forgetting. Luke Dittrich’s quest tounderstand the amnesic patient who taught the world so much about memory leadshim to the shoals of his own family tragedy and an ending that will break yourheart. But it’s his beautiful unfolding of the story, the art of his sentencesand reportage, that you’ll never forget.”–Michael Paterniti, author of _TheTelling Room_ About the Author Luke Dittrich is a National Magazine Award-winning journalist, and a contributing editor at _Esquire_. This is his first book.

We accept all major Credit Cards, Amazon Payments, and Bitcoin.